For those of you who have not been to Tampa, I am serious when I say you should visit.  It’s not a big town and it is not (sorry people from Tampa) a particularly attractive town but – wait for it – Tampa has great food.  I am serious.  Yes, yes, you can get the usual run of the mill crap that you get in any place in the world these days, but you can get seriously good food in Tampa.  In addition to Thai, Vietnamese and Mexican, and alongside excellent Southern Soul Food, you will find that the portions are not HUMUNGOUS unless you want them to be (at an all you can eat buffet, for example) and the service really does come with a delightful Southern smile.  I loved being called Ma’am all the time until I realised that every woman whose name you don’t know is called Ma’am.  It’s nicer than the timid “excuse me” that we tend to use over here.  Fresh salad (Florida is the Salad Bowl of the USA and their winter is close to a UK spring so greens are at their best now), sweet fruit (citrus, of course, but also strawberries and avocados), good meat and dairy, marvelous fish and shellfish, excellent coffee (wait – what?) and good bread.  It’s all there in Tampa.

Tampa is also home to a large Cuban community that came over from Cuba in the middle of the 19th century.  Like all immigrants, they travelled with their bread (and also their toast) and thankfully they brought their coffee.  You can get rubbish, weak, you-can-see through-it-as-it-pours coffee in Tampa but you can also get cafe con leche:  thick, strong, milky coffee made with beans roasted in the Cuban style (with sugar) right in Ybor City in Tampa.  When you walk through Ybor you smell the coffee roasting at the many roasting places and it’s hard to wait to get to La Tropicana cafe or La Segunda Bakery to have your breakfast – Cuban toast or guava pastries, or eggs or black beans – as long as cafe con laiche is in the cup, every day is special.  They say that the Cuban food and culture in Tampa is more original than that in Miami or, indeed, in today’s Cuba.  Those who left Cuba (and continue to do so) when Castro came to power have come to Tampa but have tended to congregate in Miami.  The Cuban culture in Miami, therefore, has evolved more profoundly since the mid-1800s just as the Cuban culture in Cuba has evolved.  With less new blood into a more established community, the Cuban culture has remained closer to what it was in the mid-1800s when the Cubans (or Spanish, as they were called then) first arrived.  Ask any Cuban in Tampa and they’ll tell you that things are different in Miami – and that includes the bread. 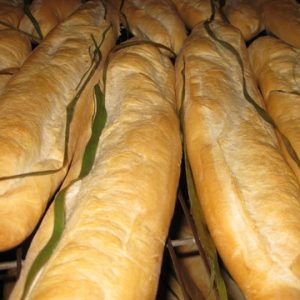 La Segunda has been going since the mid 1800s and was founded by a Cuban whose family originated in Spain.  The same family still own the bakery and the recipe for the Cuban bread has remained unchanged since then.
Print Recipe Pin Recipe
Course Breakfast
Cuisine Spain

4 thoughts on “Making bread with La Segunda Bakery in Tampa”