From our roving correspondent, Lisa Wilson, founder of Eventful Bread

Go into almost any English pub for a taste of British food and you are likely to see a Ploughman’s Lunch on the menu. What is a Ploughman’s Lunch? At its simplest, it comprises a thick wedge of crusty bread, a large chunk of cheese and a pickled onion. It then became the quintessential English pub lunch in an age when many pubs didn’t serve food at all. On a Monday evening in Leicestershire we took Ploughman’s Lunches to a new dimension.

It seemed only natural to launch The Ultimate Ploughman’s Loaf Bake Off event in the historic Baker’s Arms, a beautiful pub dating back to 1485 with its very own communal bread oven. The Ultimate Ploughman’s was a bread baking competition to create the Ultimate Ploughman’s Loaf, using local produce.
This was an opportunity for Bread Angels, local bakers and artisans in Leicestershire to show case their work and come together to celebrate Leicester’s fantastic foodie scene. Bread heads and foodies assembled in the enchanting pub lit by candles and heated with a wood burning stove. It looked like a film set, and it was – local TV production company Eclectic TV recorded the evening for their short film about the ultimate ploughman’s lunch and good food in the Midlands. 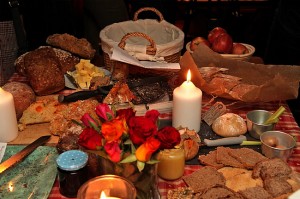 The basis of any good Ploughman’s is of course, good bread. A talk and kneading demonstration from Bread Angel Rosie Clark shared the importance of good bread and stone ground flour. 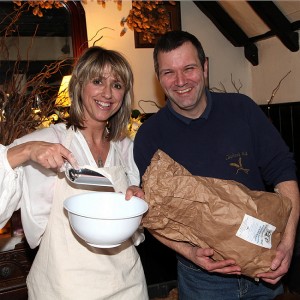 Traditionally a ploughman’s lunch uses locally made cheese. Chris Hawkins from Christopher James Deli came along and brought a selection of wonderful cheeses; a Sparkenhoe Red Leicester, a Vintage Cheddar and Bosworth Blue to accompany a perfect ploughman’s lunch. With his lovely daughter, they shared their expertise knowledge and samples of their great produce. 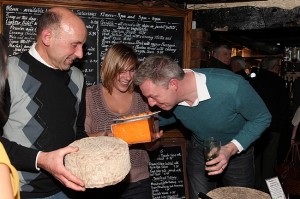 This was complimented by Lucy Cufflin’s beautiful pickles and chutneys. Traditional flavours and fresh exotic ones, we particularly enjoyed the strawberry and balsamic combination. Did you know chutney was a Hindi word?

The Bread Angels were on top form. Sophie Braybrooke from Sophslittleloaf delivered Ploughman’s Cobs, Penny Smith from Magic Dough Deli created ‘The Hub’, Jasmine Sore brought a walnut and raisin loaf to the table and Suzy Breadcrumbs nailed it with a red onion wholemeal.  All the loaves were outstanding, looked fab and tasted better, and all used locally sourced Leicester produce. The judges had a tough decision on their hands/plates…

In the end Penny’s ‘Hub’ triumphed and won the title of The Ultimate Ploughman’s Loaf’. The judges Chris Smart, Landlord of The Bakers, Maurice Flynn from East Midlands Today and Ben Jackson from BBC Radio Leicester all felt it encompassed what a good Ploughman’s should be. A deserving winner, Penny was presented with a gorgeous hamper courtesy of Christopher James Deli.

Bread Angel Penny Smith (@magicdoughdeli) exclaimed, “It was a real delight to meet up with the bread angels again for the Ultimate Ploughman’s Bake Off.  It was such a convivial night and I was struck by how bread making had managed to bring so many lovely people together.  It was wonderful to see everyone at the pub tucking into the bread and enjoying it with such gusto! It was a particularly special night for me as it was the first time in my life I’ve ever won a competition.  I jumped up and down with excitement like a 10 year old child when it was announced and haven’t stopped smiling since!”

Not only was it bread, cheese and pickle evening, but a true community event with people coming together to make magic happen. I can’t wait to plan the next one, ultimate themed suggestions welcome!