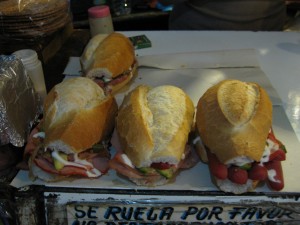 But WHAT a white bun…and WHAT a sandwich…..Just like the little girl, when they are good they are very very good and when they are bad they are horrid.  The problem is that there is no single way to make a bolillo and, of course, inside a torta, like inside a sandwich, you can have anything you want.

The tortas above, sold in a tiendita (tiny little shop) on Francisco Sosa next to the Plaza Santa Catarina in Coyoacan, come in two varieties.  One: ham, cheese, jalapeno peppers, mayonnaise, avocado, sour cream, and lettuce.  Two:  sausage, jalapeno peppers, mayonnaise, avocado, sour cream, and lettuce.  Just two kinds of tortas, and that’s enough.  They sell out every day.  In fact sometimes the shop keepers, who buy the bolillos from their local bakery on the east side of the city and transport them to the shop in the south part of the city, are forced to go to the local super market to buy more bolillos to make more tortas, so popular are they with their local crowd.  Hint:  get there early because the bolillos from their baker are FANTASTIC and the ones from the supermarket are mediocre, but more on that later…

You can find tortas with virtually anything in them but, unlike most of the rest of the world where shops may be famous for the range of sandwiches they serve, in Mexico, shops may be famous for the single kind of torta they serve.  Two of my favourites include Tortas aogadas (drowned tortas) – a speciality of Jalisco – which are tortas served in a deep plate or bowl either partially or fully submerged in a spicy sauce or a soup made with chile de arbol; and tortas de pierna which have shredded meat from a roast leg of pork in them.

As with all sandwiches, the quality of the ingredients (including the bread) make or break the torta.  And as with all bread, there is no single recipe for tortas.  Some recipes call for sugar or honey, some are glazed with salt water or a corn starch wash, some are spayed three times in the first ten minutes in the oven and some are sprayed once before they go in.  Some have lard and some have butter, some have vegetable oil and some have margarine, some even have cinnamon in them!  Some are made with old dough and some are not.  All are agreed, however that the dough for tortas is made with plain (reasonably low gluten) white wheat flour.  They are all shaped like a sausage with pointy ends.  They are all about 5 -6 inches (10 cm?) in length.  They all have a split down the top.  They all have a glaze of some description.

The point is the texture – a good bolillo is really crispy on the outside  – so that the crumbs go all over the place – and really soft and squishy on the inside – but not so soft and squishy that the dough sticks to the roof of your mouth.  They should not have the feel of nasty white sliced bread (although plenty do), they just feel soft and lovely – a treat so good that it is worth doing your homework.  If you can, visit Mexico and eat tortas to find the best one and then tell us where you ate it.  Or, experiment to find the best bolillo recipe for you and your oven.  Here is one possible recipe. Do give it a try, then if you want to vary it or do some research to find other recipes please do.  Let us know how it goes and send us your recipes and photos.  We love mail!

One recipe for bolillos

Mix this together roughly so that all the ingredients are incorporated into a ragged mass.  Cover with clingfilm and leave out of the fridge for 8-24 hours.

If you are using dry active yeast you must proof it first.  To do this, measure the flour into a big bowl.  Make a well with your hands and sprinkle in the yeast.  Cover it with the water and let it sit for 15-20 minutes until a beige sludge has formed on the top.  Then add the salt, the starter and begin to knead.  If you are using fresh or instant yeast, simply put all the ingredients into a big bowl and begin to knead.

Knead well for a good 10-15 minutes and then pop the dough back into the bowl, cover it with cling film or a tea towel and let it rest for 1-2 hours until it has doubled in size.

Pull it out and push all the air out of it.  Give it a good knead and the put it back into the bowl to let it rise again for 1-2 hours until it has doubled in size again.

Pull it out again and this time form it gently into one long sausage shape.  Cut this into 24 pieces and roll each one into a tight ball.  Let them rest, under a tea towel for 15 minutes and then form them into individual sausages with pointy ends. The easiest way to form the pointy ends is to simply form a sausage and press down with the edges of your hands about 1 cm from the edges of the sausages to form an indentation at either end of the sausage.  These look a bit like ears at this point, but they will form pointy ends while they rise! Place them on cookie sheets that you have lined with baking parchment.  Give them plenty of space so they don’t glom together as they rise or bake.  Cover these with a tea towel and let them rise for about one hour.

Preheat the oven to 200 degrees C and, before you pop the dough in the oven, make a deep cut from end to end in each bun.  Spray them with water from a plant sprayer or paint them a glaze you have made by boiling about 150 ml of water together with 1 tablespoon of cornstarch until it becomes clear.  Pop them in the oven and bake them for 15-20 minutes.  The crust should be golden and the bolillos should sound hollow when you tap their bottoms.  Let cool completely and fill with some gorgeous filling to make yummy tortas.