Nick Harman has always wanted to be able to bake good bread.  He tries and tries but somehow cannot get the feel for it, or so his partner says!  So, between jaunts to judge this, taste that, try that and see the other, he and his long term side kick and foil, Al, arrived on my doorstep to get a feel for dough.  Well, Nick did.  Al wanted to keep his mitts dry for the camera.

“I see the Richard Bertinet sticky dough thing,” Nick said excitedly as we talked about what he wanted to achieve, “but I just cannot seem to get it together!”.  I suggest it’s just a matter of trusting the dough.  As readers know by now, my philosophy is that you cannot really fail at bread and, in the end, everything is good toasted.

At the home of Virtuousbread.com there was hardly any flour!  Kevin from Stoate’s flour was going to deliver the next day so it was a whole spelt loaf or nothing for the intrepid Nick.  New method.  New flour.  Across the river.  He was several steps out of his comfort zone but boldly decided to go ahead.  Fortified with coffee and some Danish rye we began with the usual simple recipe, flinging all the ingredients into the trusty kitchenaid.  As Nick always uses a mixer there was little point in kneading by hand. 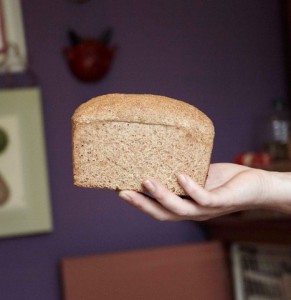 One small loaf300 grams of flour (in this case, stone ground, organic spelt flour from Stoate’s)
200 grams of water
1 package of instant yeast (in this case Allinsons)
1 tsp salt

After about five minutes of kneading, the dough had formed itself into a tight ball and come away from the sides of the mixer.

“That’s perfect, isn’t it,” Nick exclaimed.  “That is what all the books say – the mixer book included:  that the dough should form a tight ball and come away from the sides of the mixer.”

Indeed, he is right, that is what the books say. However, for me, brought up in the bread tradition of Germany and lately learning from Swedish bakers, bread in a tight ball that comes away from the sides of the mixer is far too dry.  And so, an extra 50 grams of water went in and the resultant slush slush of the mixer was a cause for concern for my foodie guest (and a source of hilarity for the observant Al).

“That’s never going to work…that is goo, not dough….but wait, ah ha, look, it’s coming together!  I would have given up on it….”

The ideal texture for dough is sticky.  When you haul it out of the machine you need a scraper and it moves slowly out of the bowl like a giant amoeba, clinging tightly to its cosy home.  It does not drop out in a clean thud.  On the work surface, you can give it a little knead, during which time it will stick a bit to your hands, and then you can blob it back in its bowl to do the first proof:  2 hours in a not so warm place.  We put it on the balcony and settled in to drink more coffee while they told me hilarious stories about their years in advertising and then the food industry and I explained why the dough was going to sit around for so long.

Contrary to popular method and many cook books which say, “put the dough in a warm place and wait for an hour”, I leave my dough for several hours and often overnight in the fridge or outside in the winter.  The only thing that kills yeast is heat, not cold:  dough will rise even when it is close to freezing.  The longer the proof, the more easily the bread is digested and the more nutrients we absorb from it.  We are not cows.  We don’t have four stomachs and most of us have never had the urge to graze on raw grass.  For the same reasons that we are not really attracted to eating raw grass (it’s not good for us and we know that in some part of our lizard brain) we should not be eating raw flour, or raw grain of any kind, really:  We don’t digest it particularly effectively and as a result we feel uncomfortable and we don’t get the maximum nutritional benefit from it.  Some people really suffer:  bloating, digestive problems and genuine illness.  If the grain is not properly broken down outside of our bodies, it continues to get broken down inside our bodies:  it actually ferments inside us, leaving us gassy, big tummied, and under nourished.  Bread that takes 90 minutes to go from raw flour to sliced and bagged is not sufficiently “broken down” outside the system for many people.  Not everyone feels poorly when they eat bread that has had a rapid rise; but many do.  Even if you don’t feel poorly, however, you must accept that you are not getting the nutrients out of a rapidly risen bread that you would do out of a slowly risen bread.  Even flat breads and pasta dough are left to rest.  It is not necessarily wheat that is the baddie in many diets:  it is the fact that the wheat is too raw.  Leaving the dough to rest has the additional benefit that it allows the dough to “strengthen” (assuming there is gluten in the flour), producing a better final product. 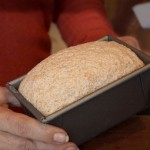 The dough – ready for the oven – 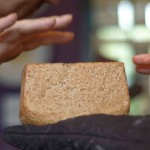 Tap Tap – When they say hollow they mean hollow! 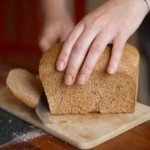 After 2 hours we gazed lovingly at our puffy mound of delightful dough, now twice its original size, and with swift and merciful despatch, we squashed it into a rectangle, rolled it up into a sausage and popped it in a Lakeland baking tin to complete it’s second rise (1 hour) before baking it (45 minutes at 200) admiring it and scoffing it down with butter.

“slfjsdoi;fviuhrj” mumbled Al with his mouth full of bread and butter (the answer, remember, to all things).

And all was well.  When last sighted, Nick was rising a sticky loaf in his airing cupboard and dribbling honey into his keyboard.  I don’t know how that loaf turned out though.

The really good photos in this post were taken by Al, not me.  Hint:  there is only one photo here that Al did not take and he is in it.  All of the others were taken by him.  For his details, when you need an interested and interesting photographer, click here.