These doughnuts are made before lent in the Mennonite communities in Canada. They are light and flavourful and irresistable. This recipe makes enough for a party so if you are not planning a party, best cut it in half. 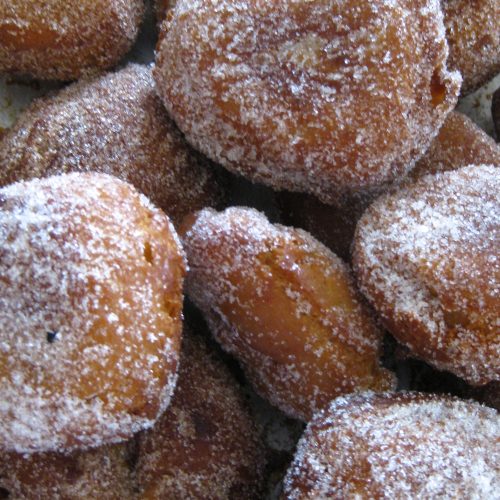 Jane Mason
Doughnuts are one of the many ways people around the world celebrate Lent.  In the Mennonite community in Canada, they are called Fastnachts – literally "Fast Nights" where "Fast" means "to fast" as opposed to the opposite of slow!  So, these are eaten on the night before lenten fast – in other words, on Shrove Tuesday.  These doughnuts are fun to make and may well be the most delicious doughnuts you have ever tried.  A far cry from cardboard flavoured mass produced ones.  The flavour comes from good ingredients and a very long fermentation time.  Start these doughnuts in the morning of the day you want to eat them or even the night before.  They sit around minding their own business for most of the time.
Print Recipe Pin Recipe
Prep Time 1 d 4 hrs
Cook Time 1 hr
Course Breakfast, Dessert, Snack
Cuisine Canadian, Germany
Servings 30

Like this recipe?  I came from The Book of Buns, published in November 2013 and available on Amazon.