What is Dia del Muertos?  What is Pan de Muerto? And what are all those skeletons doing dancing about?

I timed a recent lightning strike visit to Mexico to coincide with the day of the dead. This is in fact a four-day holiday from 1-4 November every year.

Mexicans have a strong connection with death.  They laugh at it, joke with it, talk to it, and embrace it.  Once a year they set up altars in their homes which have a strict set of objects on them ranging from food and flowers to religious icons to edible skulls which, as momento moris actually have the names of all of the living in the house written on them.  Photos of the dead are placed on the altar along with, for example, their favourite food, brand of tequila or cigarettes.  People make a special effort to the cemetery and clean the grave, have a picnic and a party, invite the wandering mariachis to play favourite songs, and engage with death in a familiar and loving way.

Of course there is a special bread to celebrate the day of the dead!  It is called Pan de Muerto – there is no clever translation so….day of the dead bread will have to do.  Like all kinds of bread, there are one thousand ways of making Pan de Muerto, one thousand shapes, sizes, colours, and ways of presenting it.  The common themes are that it is an enriched bread (containing things like milk, butter, eggs, spices, dried fruit…) and that there are “bones” on the top of it made of dough.  In some cases there are little ceramic skulls or painted faces baked into the bread’s surface to make it even more like a dead body!  It can be round or oblong – that depends where you come from.  It can also be white (to symbolise the death of a child) or dyed purple (to represent the death of a wealthy person) and any colour in between.

In Mexico city, the traditional shape is round so that is what we made.

First we made the dough: 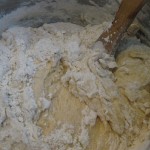 Then we shaped it, using strips of dough for the bones and a little dough ball for the head:

After baking, we painted it with butter and dredged it with sugar:

In some cases you dye it:

In some cases you fill it with “nata” which is the cream that rises to the top of unpasteurized milk when it is boiled:

In all cases you get together with your family and eat it while communing, very happily, with death.