Around the world, people have adapted to making bread with what they have – what’s on hand, and what is inexpensive. Wheat flour is often imported or scarce and there are less expensive, local options that on their own do not result in great bread. Oats (in Scotland), corn meal (in NE of the United States), rice (in Asia), yucca (in Latin America/Carribean), or potatoes (in Ireland) would have stretched out the wheat flour, making two loaves in the place of one. 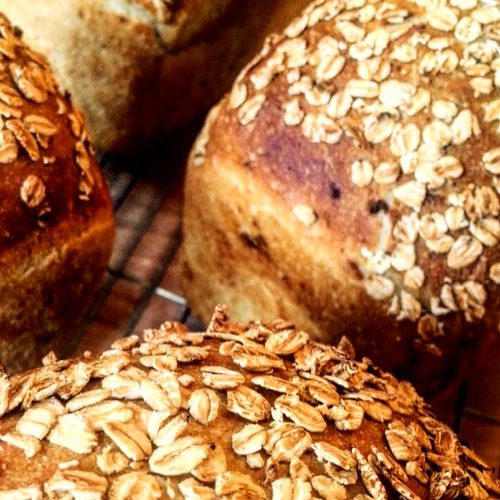 Jane Mason
This "Maritmers' bread" originates, in Canada, in the Eastern, or Atlantic provinces. The early settlers included Scottish people who brought their food with them – including oats and oat bread.  Oats would have been the cheap filler in the bread, making the more expensive wheat flour go farther.Don't be fooled. This is delicious and nutritious bread: simple, hearty, and satisfying…a real "stick to your ribs" bread; perfect for a long day at sea. The recipe was first published in my book, All You Knead Is Bread.
Print Recipe Pin Recipe
Cook Time 45 mins
Soak oatmeal 12 hrs
Total Time 45 mins
Course Breakfast
Cuisine Canadian, Nordic

The night before you want to bake

When you want to bake the next day